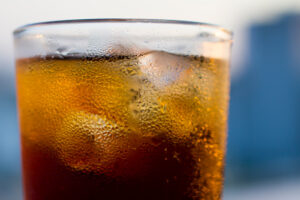 Condensation is moisture vapor in the air that condenses on a surface.

Meteorologists use dew points to describe how much moisture is in the air—the temperature that air must cool to reach saturation if moisture content and air pressure are constant. For example, if the weatherman states that the dew point temperature is 55°F, water will condense on a solid surface when its temperature falls to 55° or below.  This phenomenon is what causes beads of water to form on a glass of iced tea on a hot summer day; the surface temperature of the glass filled with ice is below the dew point temperature and the water vapor in the air creates condensation on its surface.

The same phenomenon can occur on a substrate surface if that surface is colder than the dew point temperature of the ambient air above.  Just as with the glass of iced tea, moisture vapor in the air can condense on the substrate surface.  When this happens with concrete, it is commonly referred to as “concrete sweating” or “sweating slab syndrome”. 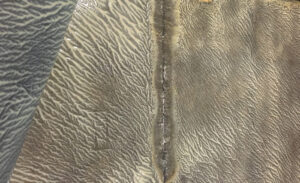 Condensation adds moisture to the adhesive under carpet tile. 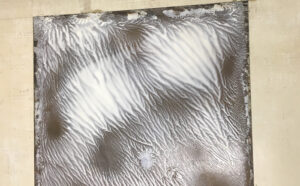 Condensation adds moisture to the adhesive under LVT.

PrevPreviousTAYLOR TIME LIVE Webinar “The Billion Dollar Question”
NextCommon myths about concrete moisture and mitigationNext
We use cookies on our website to give you the most relevant experience by remembering your preferences and repeat visits. By clicking “Accept All”, you consent to the use of ALL the cookies. However, you may visit "Cookie Settings" to provide a controlled consent.
Cookie SettingsAccept All
Manage consent

This website uses cookies to improve your experience while you navigate through the website. Out of these, the cookies that are categorized as necessary are stored on your browser as they are essential for the working of basic functionalities of the website. We also use third-party cookies that help us analyze and understand how you use this website. These cookies will be stored in your browser only with your consent. You also have the option to opt-out of these cookies. But opting out of some of these cookies may affect your browsing experience.
Necessary Always Enabled
Necessary cookies are absolutely essential for the website to function properly. These cookies ensure basic functionalities and security features of the website, anonymously.
Functional
Functional cookies help to perform certain functionalities like sharing the content of the website on social media platforms, collect feedbacks, and other third-party features.
Performance
Performance cookies are used to understand and analyze the key performance indexes of the website which helps in delivering a better user experience for the visitors.
Analytics
Analytical cookies are used to understand how visitors interact with the website. These cookies help provide information on metrics the number of visitors, bounce rate, traffic source, etc.
Advertisement
Advertisement cookies are used to provide visitors with relevant ads and marketing campaigns. These cookies track visitors across websites and collect information to provide customized ads.
Others
Other uncategorized cookies are those that are being analyzed and have not been classified into a category as yet.
SAVE & ACCEPT